The phenomenon of child abuse has grown and it occurs in various forms, such as physical abuse, sexual, emotional and neglect. Particular emphasis has been placed recently on the influence of the Internet and its possible consequences due to its uncontrollable use.
This presentation is being developed for the Against Child Abuse Day that aims to inform and timely prevent against the phenomenon. In addition, the role of the family and the social context will be discussed. In particular, the investigation process in Cyprus, signs of recognition and ways of approaching this phenomenon will be explained. 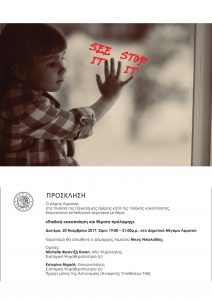 Psychotherapy is the process that, creating the necessary space…

Counseling is a meeting place where the counselor…